Birds are the last surviving groups of dinosaurs. They are vertebrates and are characterized by feathers, a strong skeleton and toothless beaks. Furthermore, they reproduce by laying hard-shelled eggs.

Most of the birds we see daily are small and often weigh only a few grams. However, some species of birds can be over 2 meters high and weigh about 104 to 156 kilograms. In this article, we will discuss 15 of the largest birds that live on the planet.

The common Ostrich is the largest bird in the world. These birds are native to Africa and usually weigh between 63 to 145 kilograms. Some male birds can even weigh up to 156.8 kilograms. Male ostriches are about 2.1 to 2.8 meters high, while female ones are 1.7 to 2.0 meters tall.

Facts about the common Ostrich 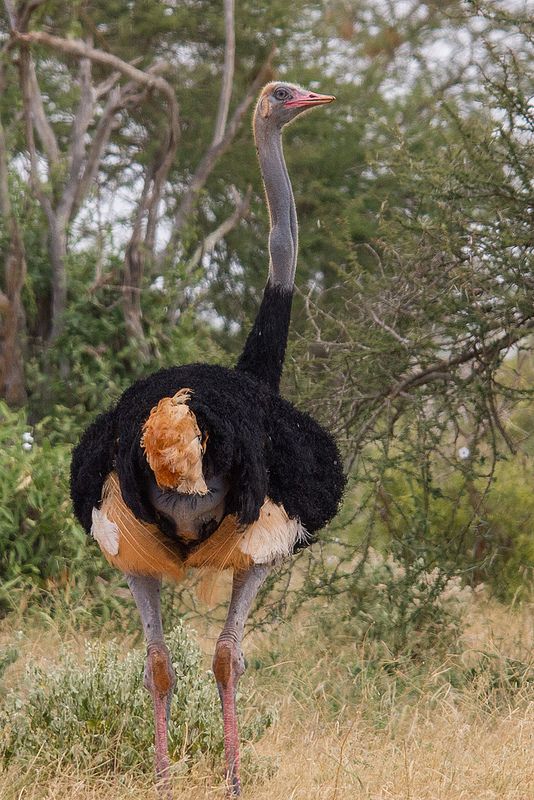 The second biggest bird on Earth is the Somali ostrich, native to the Horn of Africa. They are found in Somalia and northeastern Ethiopia. A male Somali ostrich can weigh up to 130 kilograms.

Facts about the Somali Ostrich

A Southern Cassowary is the largest Asian and Australian bird, native to New Guinea, Indonesia and northeastern Australia. The bird is about 127 to 170 cm high and weighs about 36 to 50 kilograms (males) and 60 kilograms (females).

Facts about the Southern Cassowary

Northern Cassowary, also known as the golden necked Cassowary is a large bird native to New Guinea. The female members of the species weigh up to 70 kilograms while the male members are smaller and weigh about 47 kilograms. The birds grow up to a height of 1.8 meters.

Facts about the Northern Cassowary

The emu is a flightless bird, endemic to Australia. They can reach up to 1.9 meters and weigh between 18 and 60 kilograms. The female members of the species are slightly larger than the males.

Facts about the Emu

The Emperor Penguin is native to Antarctica where the temperatures reach -60 degrees Celcius. They weigh 22 to 45 kilograms and can grow up to 130 cm in height. The male and female members of the species are similar in plumage and size.

Facts about the Emperor Penguin Facts about the greater Rhea

Turkey was domesticated by the people of central Mesoamerica 2,000 years ago. These birds can grow up to 1.17 meters tall and weigh about 39 kilograms.

Darwin’s Rhea, also known as the lesser Rhea is about 90 to 100 cm tall. The bird weighs between 15 and 28.6 kilograms. They are native to the Altiplano or the Andean Plateau, in west-central South America.

Facts about the lesser Rhea

The dwarf Cassowary is also known as Bennett’s Cassowary. It is the smallest of the three species of Cassowary. It is about 90 to 150 cm tall and weighs between 17.6 and 26 kilograms. They are found all over the mountain forests of Yapen Island, New Guinea, and New Britain, at an elevation of 3,300 m above sea level.

Facts about the dwarf Cassowary

King Penguins live in northern Antarctica, South Georgia and other temperate islands in the region. On average, they weigh 9.3 to 18 kilograms and are about 70 to 100cm tall. The male members of the species are taller than the female ones. It is the largest species of penguin after the Emperor Penguin.

Facts about the King penguin

The Kori Bustard, on the other hand, is native to Africa. The male kori bustard is about 120 to 150 cm high and weighs about 7 to 18 kilograms. The female members are roughly half the size of the males and weigh an average of 4.8 to 6.1 kilograms.

Trumpeter Swan adults usually weigh 7 to 13.6 kilograms and are 138 to 165 cm long. However, the largest males can exceed 180 cm. They are native to North America mainly Alaska, the northern USA, and Canada.

Facts about the Trumpeter swan

The Andean Condor can reach a height of 100 to 130 centimetres. The males weigh about 11 to 15 kilograms, while the females weigh 8 to 11 kilograms. The bird is the national symbol of Bolivia, Argentina, Colombia, Ecuador, the Venezuelan Andes and other South American countries.

Facts about the Andean Condor

The Dalmatian Pelican is one of the world’s heaviest flying bird species. It measures 160 to 183 cm in length and weighs about 7.25 to 15 kilograms. The bird is native to Central Europe, India, Mongolia, Russia, and East China.

Facts about the Dalmatian Pelican

Given below is a table summarizing 15 of the largest birds on the planet.

1. Which is the strongest bird?

The largest and strongest living bird is the North African ostrich. Male members of the species can grow up to 9 feet and weigh about 345 pounds.

Adult North African Ostriches are popular for their commercial value. The creatures are bred for their large soft white feathers, their meat and skin, which are made into the toughest commercially available leather in the world.

2. What is the largest bird of prey?

The Philippine eagle is considered the largest existing species of eagles in the world. The bird measures 86 to 102 cm in length and have a wingspan of 184 to 220 cm. However, in terms of weight and bulk, Steller’s sea eagle, the Harpy eagle and the Martial eagle are all bigger than the Philippine eagle.

3. Which is the fastest bird?

The Peregrine Falcon is the fastest bird. The bird can fly at speeds between 124 mph and 168 mph while swooping from great heights during territorial displays or catch their prey mid-air.

4. What bird has the fastest wingbeat?

The horned Sungem has the fastest wingbeat. It is species of hummingbird native to South America, that flaps its wings up and down about 90 times a second.

5. Which is the largest bird to have ever lived?

Vorombe, the big bird of the world, is one of three extinct elephant birds. Evidence of the bird was discovered in 2018 and weighed between 536 to 732 kilograms. Furthermore, it grew up to 10 feet in height. Its name translates to the big bird, in Malagasy and Greek.

6. Which is the heaviest flying bird?

The heaviest known flying bird is Argentavis magnificens, also known as the magnificent silver bird. The species is now extinct, but it weighed about 70 to 72 kilograms, approximately twice a Pelagornis’ weight. It had a wingspan of approximately 5.09 to 6.07 m and a height of 1.5 to 2 m.

Yes, flamingos can fly. They prefer to fly during cloudless days with favourable tailwinds. Flamingos can travel approximately 600 kilometres in one night at about 50 to 60 kilometres per hour. During the day, flamingos fly at high altitudes to avoid predation by eagles.

The golden eagle, living in North America, northern Africa and Eurasia measures about 27 to 33 inches in length and has a wingspan of 78 inches. The bird weighs 7 to 14 pounds and feeds on rabbits, squirrels, marmots etc. It has been known to snatch foxes, livestock and adult deer. Furthermore, it is powerful enough to kill an adult man and carry babies away.

9. Can a bird fly backwards?

Although hummingbirds are the champions of backwards flight, they are not the only ones who can do so. When two herons or egrets fight, occasionally the one who is caught at a disadvantage will flutter backwards. Warblers fluttering at the tip of a branch will flutter backwards and then fly towards an insect to pick it up. Overall, any bird that uses a fluttering flight can move backwards when prompted to do so.

10. Which birds have the largest wingspan?

The Wandering Albatross has a maximum wingspan of 3.7 meters or 12.1 feet. The bird is native to Australia and New Zealand, but circles the globe on its travels. It has a characteristic white underwing with a black tip.

The Great White Ppelican has a 12-foot wingspan. It lives in swamps and shallow lakes across southeastern Europe, Asia, and Africa. Males weigh up to 33 pounds, while females are lighter and weigh about 20 pounds. These birds generally breed in South Africa. They are social animals and feed in groups of six to eight.

The Southern Royal Albatross also has a wingspan of 12 feet. They live mainly in South American waters but return to Campbell Island, as they circumnavigate the globe to lay their eggs. Their diet consists of fish caught from the water’s surface or slightly below.

The Tristan Albatross is native to the South Atlantic Ocean. It has an 11-foot wingspan that helps it forage over a lot of territories. Females feed to the east of the island, while the males forage to the west. These critically endangered birds only breed every other year, after which they mate for life. The females lay their eggs in an open heath with plenty of room to soar when taking off. Once hatched, the chicks do not leave their nests until November. The bird becomes sexually mature when it is 10 years old.

The Antipodean Albatross lives in South Pacific and comes back to New Zealand’s Auckland Islands, Campbell Island, and Antipodes Islands to breed. This bird can weigh up to 19 pounds and have an 11-foot wingspan.

It only lays eggs every two years, always returning to the area it was born to lay eggs. Antipodean Albatrosses do not become independent until they are 250 days old. Additionally, they become sexually mature when they are seven years old. Both the males and females share responsibility for incubating the eggs and raising the young

Powered by WordPress | WP Travel Magazine by WP Mag Plus